A few new items will be hitting the main shop over the weekend. They feature my favourite group of goodies: turquoise, wampum, emeralds, and koroit opal! I’m still recovering from being sick, so production has slowed a bit. For all custom and “made to order” items taking a little while longer, don’t fret! Your lovelies have not been forgotten, they’ll be with you soon ❤

First up we have a darling little size 5 koroit boulder opal ring from Queensland, Australia. The opal has been set in a gold fill bezel and blackened silver ring design. Nice and simple to highlight the awesome flash of this rock. The electric royal blue looks like lightning on dark bark, and what really sets this piece apart is the opal matrix in the center of the stone is clear! At the right angle you can see straight through. 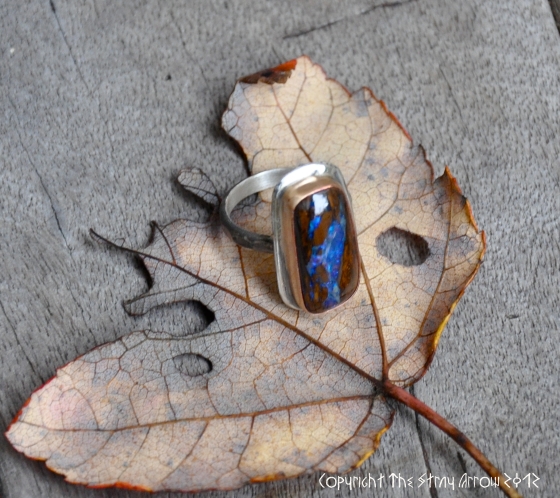 Next up we have two turquoise rings. These both tie into my Romantics theme of poetry quotes, Autumn, and the Southwest. The size 7 3/4  Hour by Hour ring features a rounded triangle cut of ribbon Royston turquoise. On the outside of the ring band lies the quote, “Dead leaves scatter, hour by hour”. This is from Oscar Wilde’s, “Impressions, I Le Jardin”. The second size 6 3/4-7  Tracks in Dusk ring features two different coloured old stock turquoise pieces from the Kings Manassa mine. They resemble abstract animal tracks. The quote on the inside of the ring band reads, “Braided dusks of the oaks“. This is from Sidney Lanier’s, “The Marshes of Glynn”. 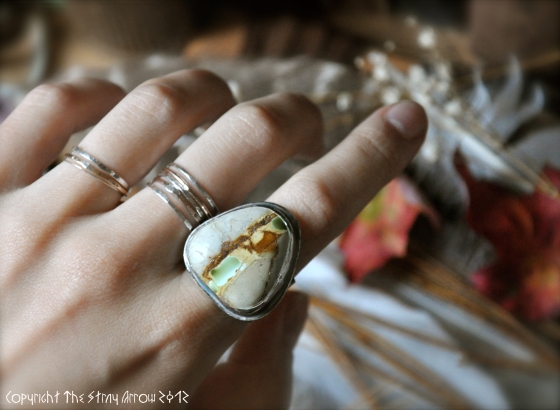 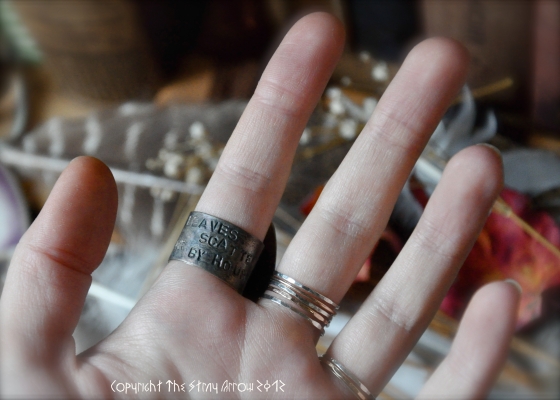 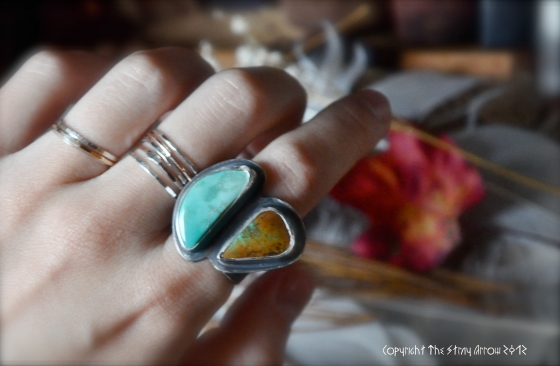 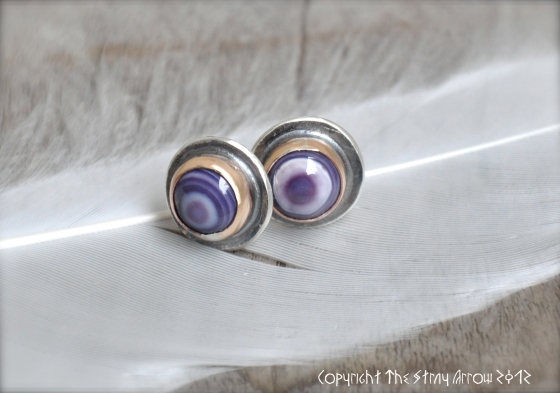 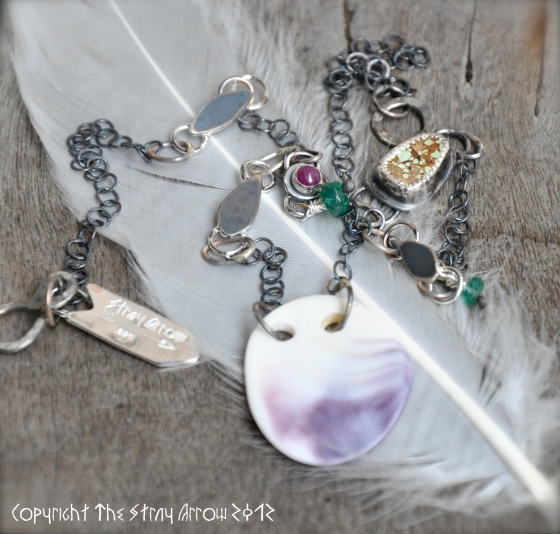 Check back in the shop this coming weekend!

Alright ladies & gents, let’s get right to it. The two types for today are WAMPUM (I know, its really a shell…), and Koroit Boulder Opal. To repeat the disclaimer from the first Rock Appreciation Day: I AM NO LAPIDARY ARTIST OR GEOLOGIST/GEMOLOGIST. All of my information comes from research and experience working with these stones, not mining or cutting them. First up is Koroit Boulder Opal….

Koroit Boulder Opal is a specific TYPE of opal solely from the Koroit opal mining area in Queensland, Australia. Like boulder/ribbon cut turquoise, the opal is within a host rock matrix. The opal matrix itself is formed when rain containing silica minerals drizzles back down to earth and weaves itself into sedimentary rocks. After all water evaporates and all that is left is silica, the silica hardens into a gel like substance with little spheres, which is what we know as opal. It is essentially hydrated silicon dioxide. The size and distance of these tiny spheres from each other is what determines the colour of the opal. This whole “opalization” process is very mysterious even to the experts, and is generally believed to span over 1 to 10 million years for creation. Way back when, the Romans would actually use opal as a good luck charm stone…

Below are past commissions or sold Opal pieces… 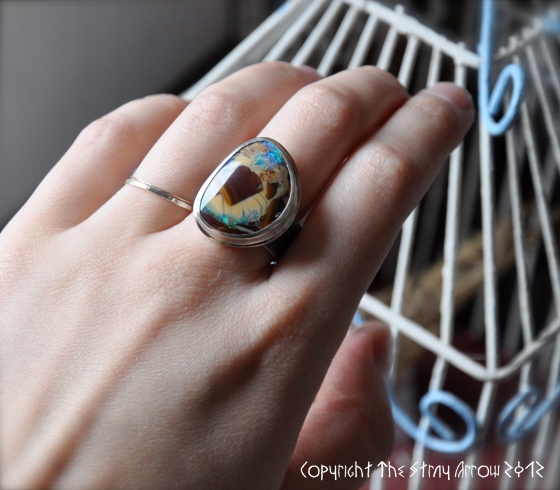 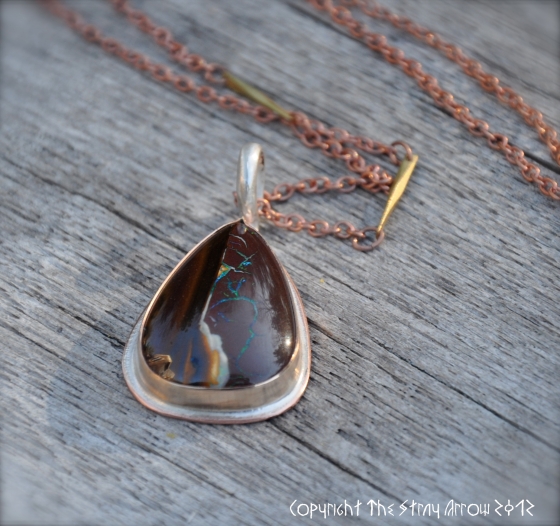 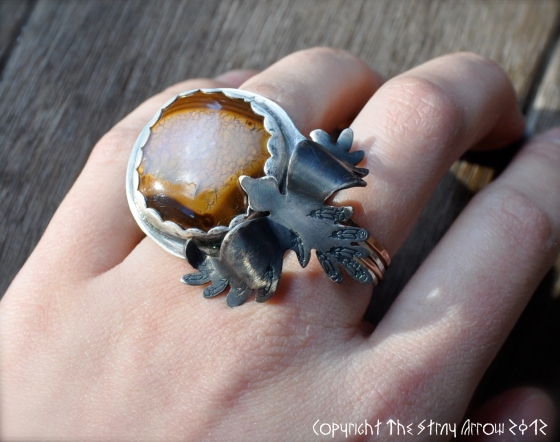 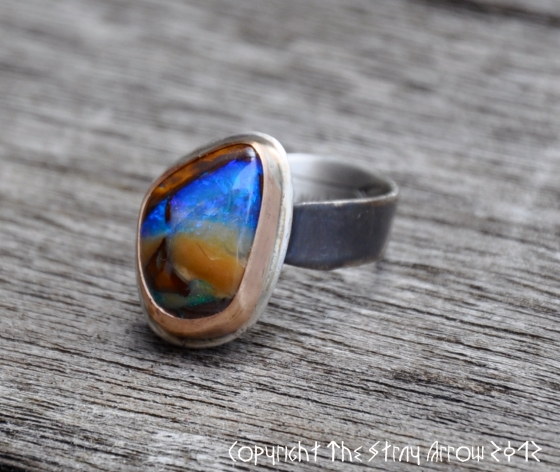 These last two are my favourite Koroit opals to date~ 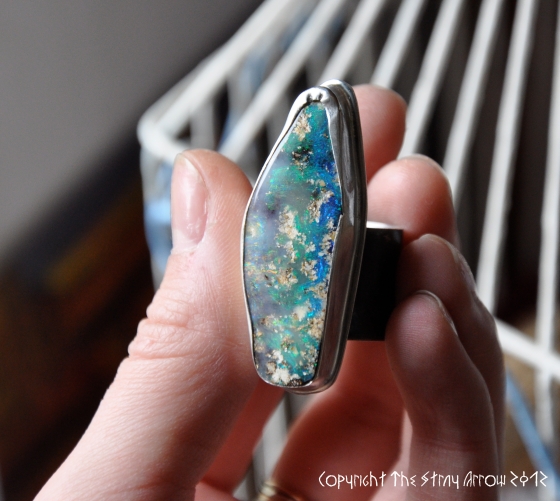 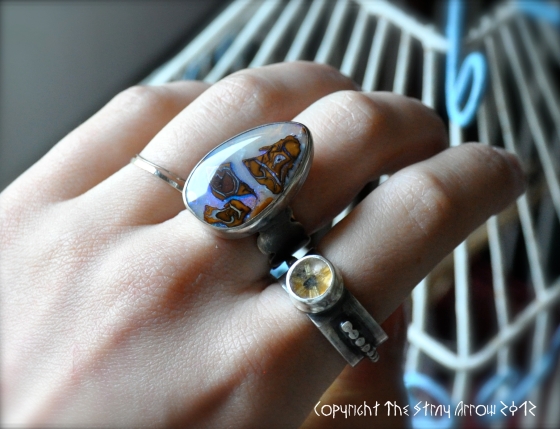 The rest below are either available stones, or pieces still in the Etsy shop (00 gauge Koroit opal plugs coming to the Plugs shop soon! http://www.GaugedbyStasia.Etsy.com).

This first photo is prime Koroit opal, just for looking and not for sharing! 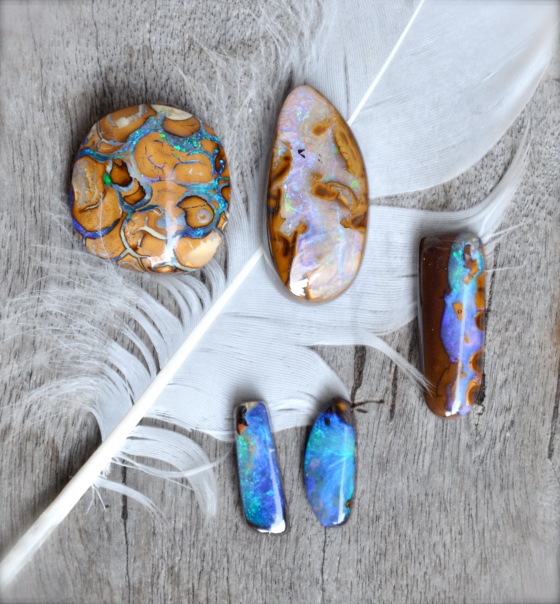 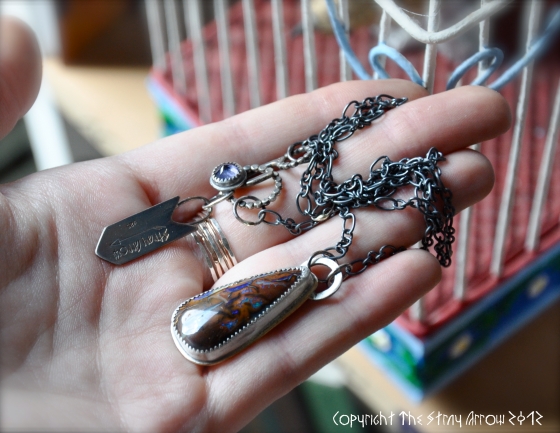 WAMPUM is something I’ve covered before. I adore it. Not just because the intensity of the colour is so beautiful for a natural shell, but because I am a nerd and love all things with deep mythological roots. The two main origin stories for wampum among the Haudenosaunee (Iroquois) are extraordinary. A short version of the Seneca Iroquois version can be found written by author Harriet Maxwell Converse. She wrote the story and other myths directly from notes she took while spending time with Seneca council members in the early 1900’s.

Wampum is carved from the quahog clam shell found on the shores of the East Coast. If you don’t know about it, but have heard the word before, you may have been told in was like “Native American Indian money”. It was only thought to be used financially because the Europeans assumed so from the importance the Natives bestowed upon it. Later on trading wampum for European goods became common. The carved wampum has actually been used for hundreds of years as trade, or for treaties. It could be strung into beaded strings called “condolence strings” for a mourned one, or expertly beaded into belts-famously known and seen in many museums- for peace or war treaties between tribes. White coloured shells represented peace, purple represented war. Although used by many different Woodlands (Eastern) tribes, it is most famously seen used by the Iroquois (Haudenosaunee). The Iroquois Confederacy consists of the 5 tribes of the eastern longhouse-one tribe for each beam, or one tribe for each part of the “Hiawatha belt”. These symbols also refer to the geological locations of the tribes. The tribes are (in the Europeanized names and spelling): Seneca, Cayuga, Onondaga, Oneida, and Mohawk. The abbreviation is SCOOM. The sixth tribe, the Tuscarora, was later added to the Confederacy when they came into the region. Wampum can be replicated in glass imitation form. It is what is used most often nowadays when creating replica pieces.  It has gotten harder and harder to find true Native wampum carvers anymore, and I know of only 3 existing in Massachusetts. The rounded cabochons and chip beads in the photos below were carved by Native Mi’kmaq artist Mark Changing Bear.

Below are sold pieces or past commissions:

Most of the gauged wampum pieces can still be purchased at http://www.GaugedbyStasia.Etsy.com . The wampum stray pieces are up for grabs for custom work~ 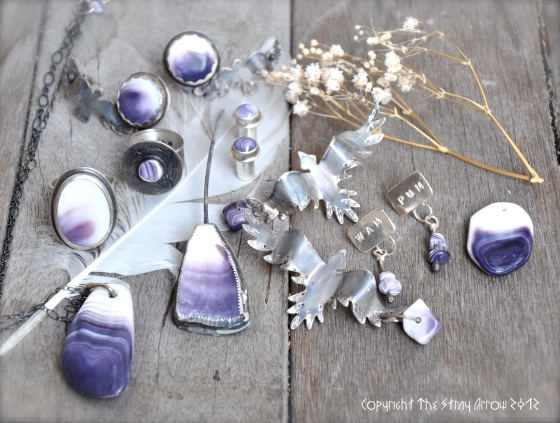 A few new pieces will be hitting the main Etsy shop, http://www.TheStrayArrow.Etsy.com, AND the Gauged shop on Monday/Tuesday. 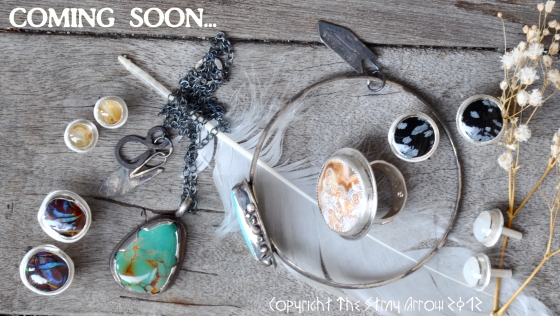 Recently a fellow artist was able to give a mini presentation of her work. You can see some photographs of it and a video of her here on her blog:

As all creative processes come from some spark of inspiration, I’d like to share a little snippet of a consistent influence. While constantly looking at new art, the ever growing tumble of talent people put out into the world, nothing gets me going as something old to groove to. Any new music I can get my hands on, I can. Lately, I’ve been filling my ears with the Vaccines, Holly Golightly and The Brokeoffs, Alessi’s Ark, and my old favourites. Here’s one of them-hope all of you give your old sparks the attention and credit they deserve!

Check back on Monday & Tuesday for shop updates!

Sorry for the delay folks! I had meant to post these Friday, but this past week was a little hectic. Below are my newly acquired treasures: some lovely smaller sized Koroit Boulder Opals from Queensland, Australia. I have tried to photograph them at different angles to show the extent of their flash and colouring. The detail in these stones are divine. All *except* the blue stone on the right in the photos of three cabs are up for grabs. Custom orders will resume July 1st unless I am currently working on a piece for you.

Also new July 1st: my first official Rock Appreciation Day! A friend suggested an in depth post of a single stone type, so from now on, the first day of each new month will feature a new kind of stone. Pieces that have either been sold, commissioned, or are up for sale in the shops featuring the stone will be shared. Check back July First to see what kind of stone you can learn about and how I chose to work with it!

I have several pairs for the stretched earlobe folks in the works. Many are dangles and hoops for tunnels in 12 gauges. These will be in the http://www.gaugedbystasia.etsy.com shop *next week*. Preview photos will be posted prior to being listed in the shop! Subscribe to the blog or check http://www.facebook.com/TheStrayArrowJewelry to find out when. 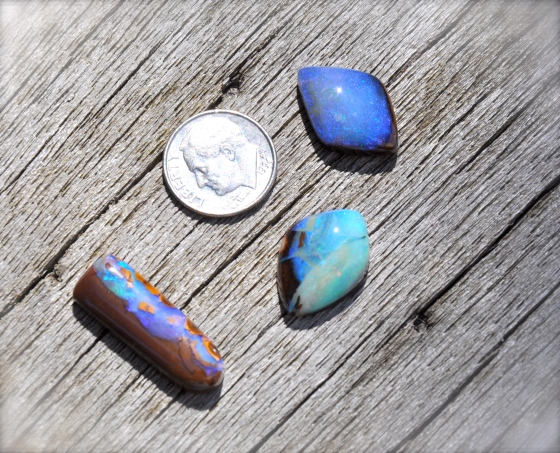 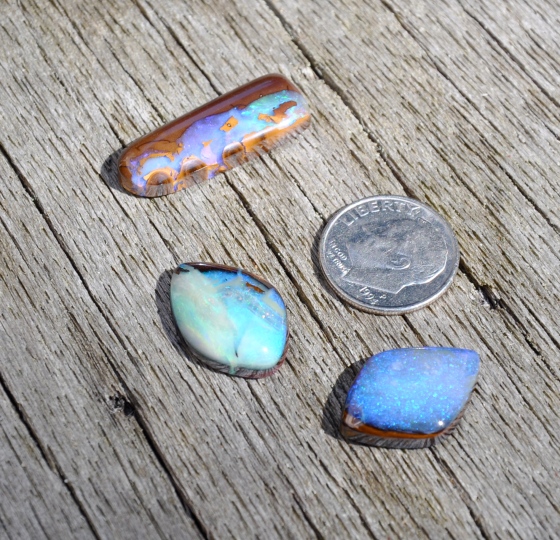 Next week: new plugs and dangles for tunnels, and some secret new goods for the main http://www.TheStrayArrow.Etsy.com shop!

In other news, saw these folks Friday night. They play a great live set! 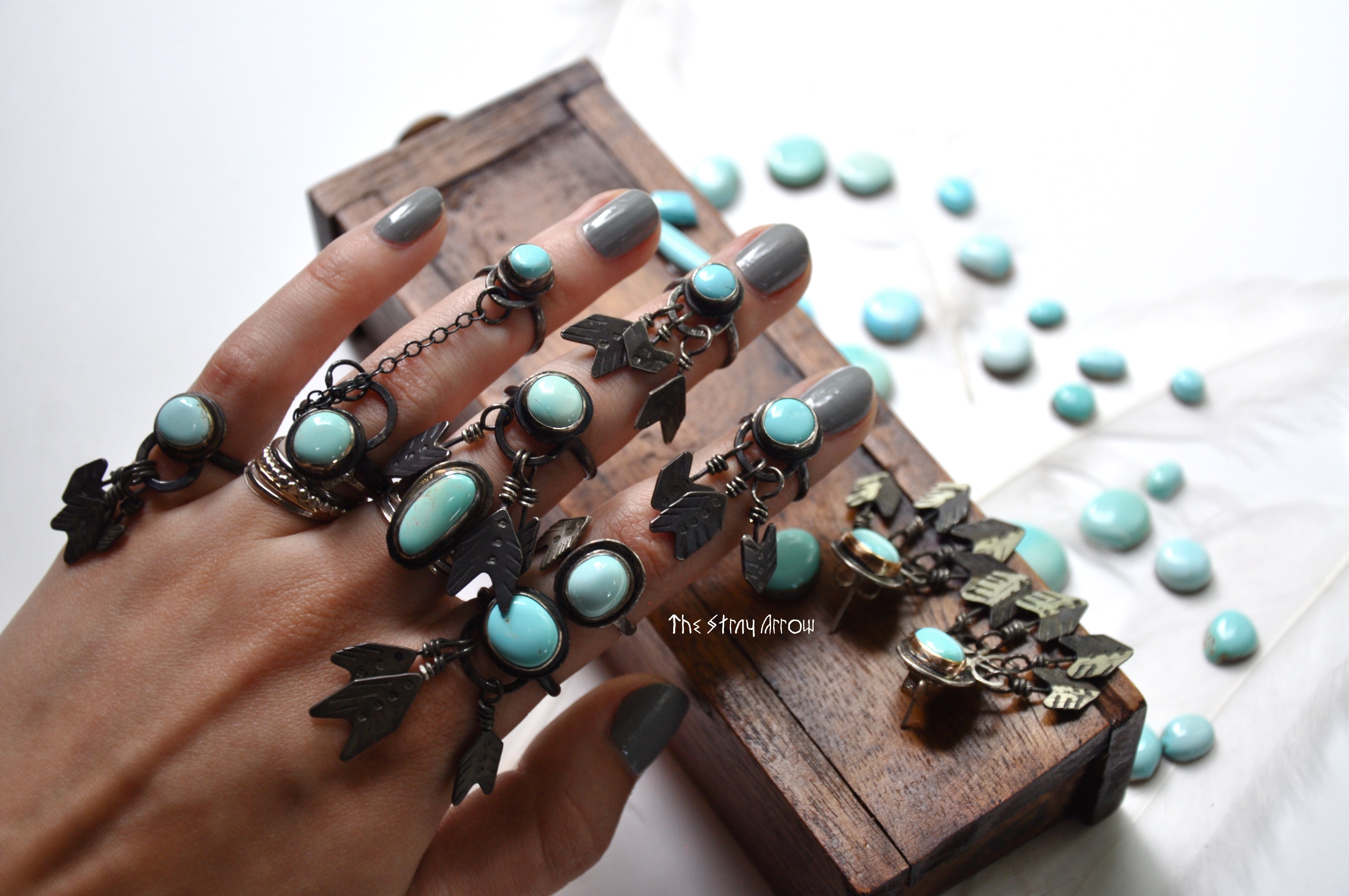 Join 290 other subscribers
Please feel free to email me with any questions! stasia@thestrayarrowjewelry.com
Loading Comments...