Its been QUITE awhile. I can’t even recall when the last of these rock appreciation days occurred, but the desire sparked after acquiring some of these lovelies…this month we have:

You know. The mesmerizing stones that look like fire spewed from a Phoenix and then solidified? Because well, they kind of are. Formed in volcanic activity that is. 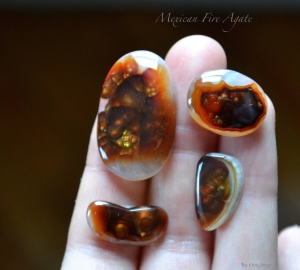 Mexican fire agate is formed in volcanic activity in the Tertiary Period, and found in the Southern USA and northern Mexico. It is actually a form of layered chalcedony quartz (agate is in the quartz family). This type of agate is rare because of its iridescent qualities that give it the look of fire and flame. It ranges 6.5-7 on the MOH’s hardness scale, and like other quartz can be polished to a great reflective waxy shine. My favourite pieces are ones with solid white or semi transparent quartz as a host rock to the fire agate. Iron oxide is what gives the fire agate its browner colourings. Rarer types include rainbow colour patterns to their shimmer from specific minerals. Metaphysically Mexican fire agate is used for calming, grounding, healing, and creativity. 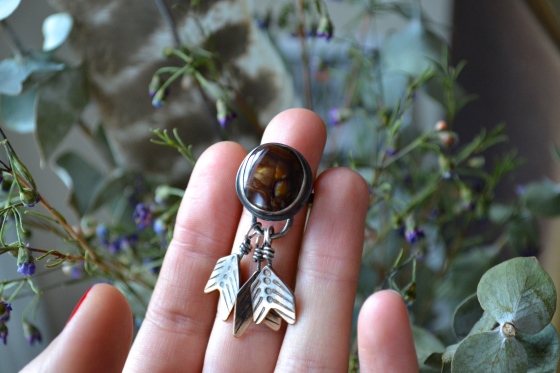 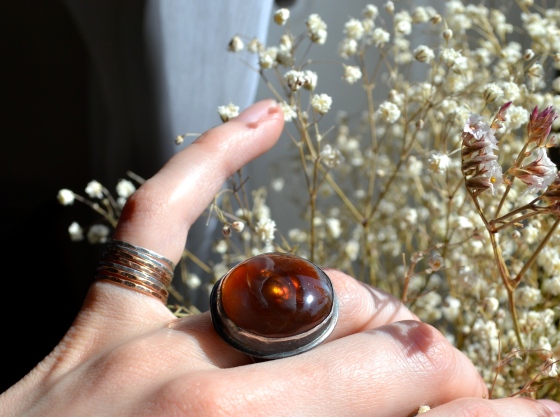 Two rings with Mexican fire agate have been made for the shop, to be included in Sunday’s update. A little twisted band stacker, and this glorious mini shadow box inspired piece:

If you have any requests for stones, gems, or minerals for the next Rock Appreciation Day, comment below!

At the bottom of the post find new goodies by a friend and fellow artist, perfect to pair with crispy Fall weather...

Any of these can be used for custom orders. The darker native silver piece in the bottom left of the first photo is being held for a piece I’m using in a Winter collection… 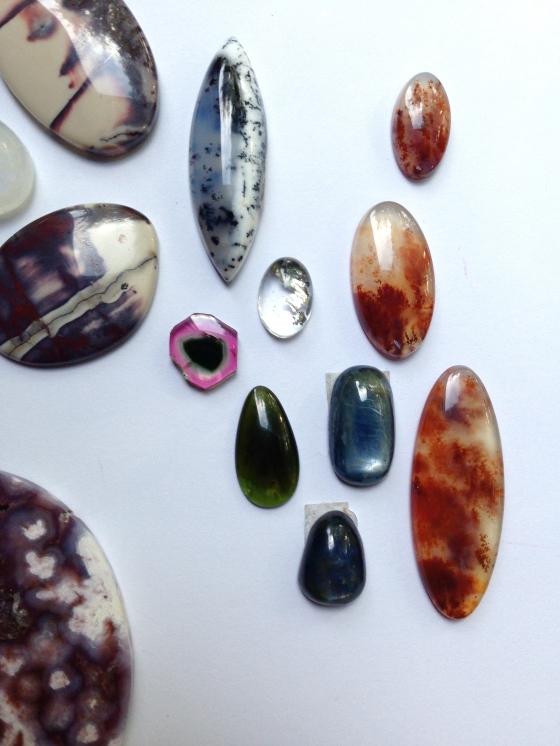 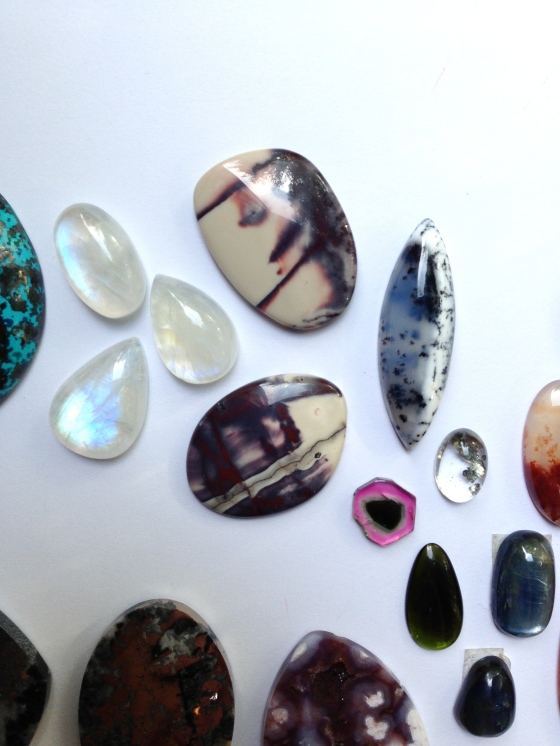 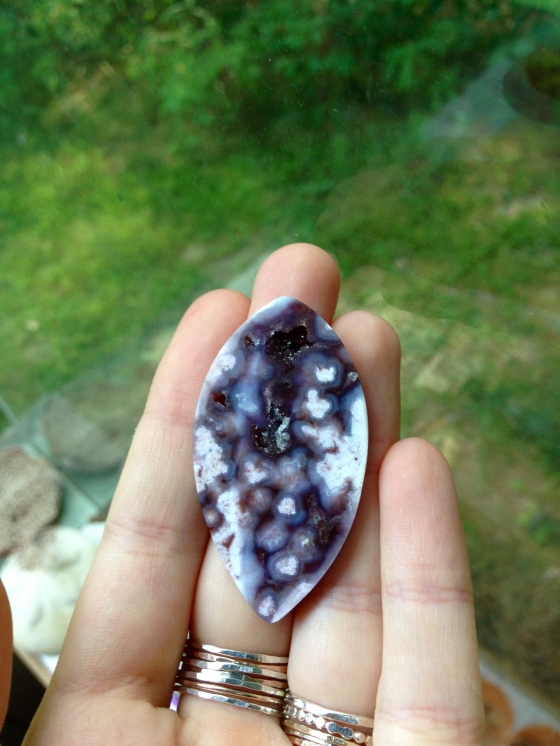 Miss Tory of ToryNova has officially released printed leggings of deliciously soft and stretchy lycra featuring more of her own illustrations. These are great and stylish for staying warm in Fall. I’ve already got the Sea Voyage babies to pair with my new heeled ankle boots! 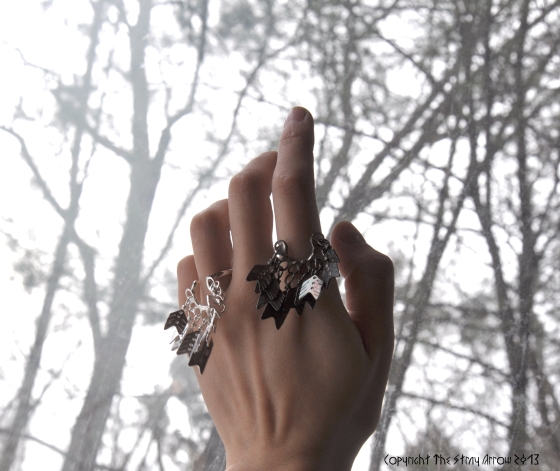 New ‘made to order’ Quiver Pack Rings feature little arrow vanes dangling from molten sterling and fine silver openings on a horse shoe shape. These can come either high polished or darkly oxidized. My jeweler’s tag for authentic Stray Arrow Wear joins the chevrons in the center. Each arrow vane is hand sawed with no template. The sides are then filed, sanded, and polished down so they are comfy and wearable-there’s no pricking here! While making the first one on a whim I was concerned they may be hard to wear, or get stuck on things. I was proven wrong. These are comfy, don’t get tangled, and make the sweetest sounding noise. They remind me of seeing little feathers sticking out of quiver packs. The dangling effect has a gypsy and belly dancing appeal. 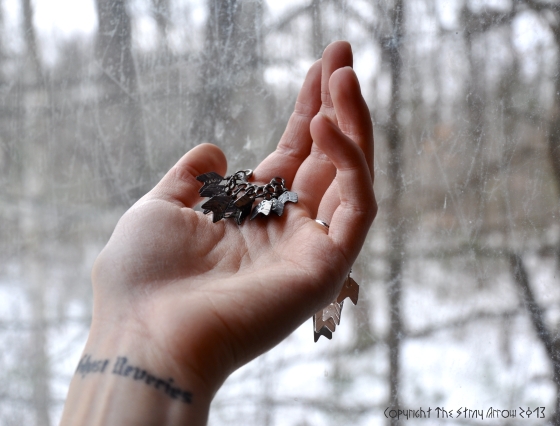 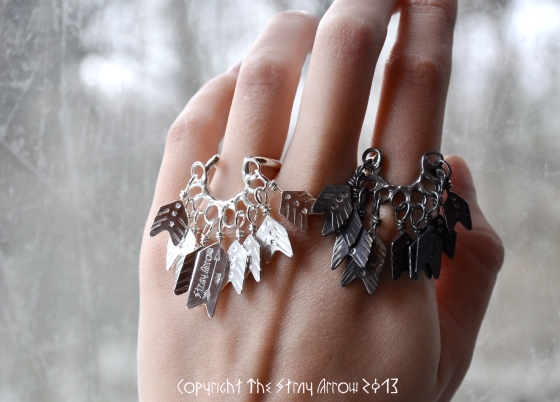 Another Oak Bark Ring, like the previous sold, will be in the shop. This one features a lovely spotted natural turquoise stone from the Cerillos mine. Set in a gold fill bezel on sterling hand sawed oak leaf. The texture and patina mimic the changes of colour in Autumn, and the rose gold fill veining also hints at a Futhark Algiz Nordic Rune.

To accompany the Wild Flower Ring in the shop that’s ‘made to order’, a Wild Flower Bangle Bracelet! Featuring a deep and dense blue natural Kingman turquoise stone on a hand sawed bronze domed flower. The bronze and silver bracelet have been patina darkened for a lot of subtle rich tones. More Kingman Wild Flower Hair Ties will also be joining these within the next few weeks…

Also, a double dose of The Archer… 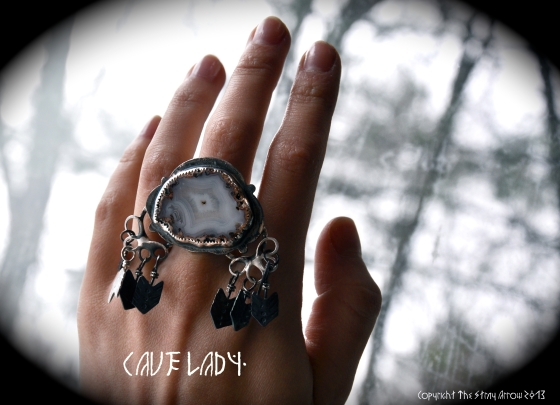 This is a new favourite. Another Cave Lady Ring with an incredible agate slice that looks like a cloud being taken over by the earth around the edges. Could be the cloud is hovering OVER the earth, but that’s less dramatic. This stone has many layers, and rests on a hand sawed sterling backing. Four arrow vanes shake from either side. The back features a spiral cloud motif. This lovely is huge, and a serious statement piece. A perfect combination of the primitive foundations and delicate romance hidden in us all. 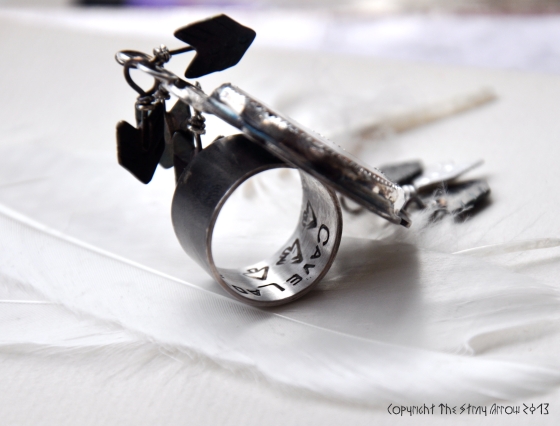 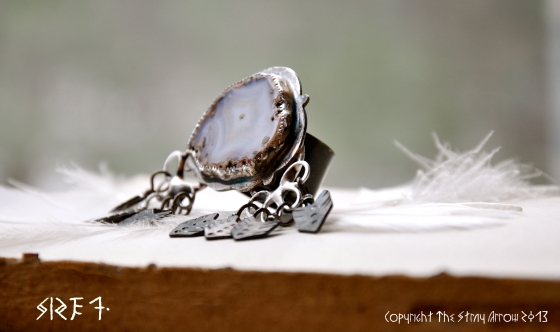 only for the bold and brazen. 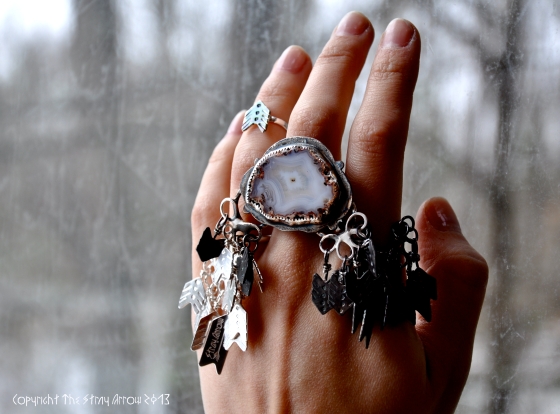 Check back to the shop to see more pictures and descriptions of these pieces.

For this double Rock Day we have Imperial Jasper, and Lace/Banded Agate. The usual disclaimers apply-

Jasper and agate are two of the most varied stone types out there. Jasper is of the quartz variety, almost always opaque, and reaches a 7 on the MOH’s hardness scale (for reference, diamonds are a 10 on the scale). It is said to be an impure chalcedony. Jasper can come in any colour. Because there are so many different colour and pattern variations, there are beyond dozens of “types” of classified jasper. Some other types besides imperial jasper would be Ocean jasper, Plume jasper, Picture or Landscape jasper, and so on. Jasper is found worldwide, but the majority of the beautiful type known as “Imperial Jasper”, or “Royal Imperial Jasper”, comes from Mexico. A light pastel version of the deeper colours associated with imperial jasper can also come from the Willow Creek Mine in Idaho. The main defining characteristics of imperial jasper are any combo of green hues, warm red/pink hues, and cream/brown hues. Rarely seen are the colder hues like grays and blues. There is a soft creaminess to the colours, and the highest grades show distinct banded patterns of colour. The bands or lines within this jasper can be referred to as “streamers”, when the jasper fractures and is then filled in with more jasper. Colours can swirl and merge from the rock forming process yielding amazing patterns. The most prized of all imperial jasper, are “Royal Imperial Jasper Nodules”. These nodules have a variety of colours in a banded pattern like an orb, stemming from the center of the stone.

The imperial jasper below is my own collection. All are up for grabs for custom orders except the small oval with rust and deep green colours of the same value. This is being used in a large ring… 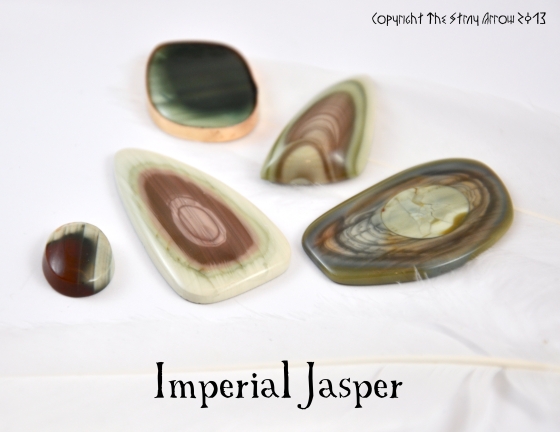 Lace agate is quite close to jasper. It is also in the quartz family, and another variety of chalcedony. Classified as microcrystalline quartz, it measures a 6.5-7 on the MOH’s hardness scale. It can be opaque or translucent, and any degree in between. Like jasper, there is an inmeasureable amount of different types. Lace agate is close to banded agate and striped agate. Crazy lace agate is a more specific type only found in Mexico. Crazy lace agate can also be known as the “Laughter Stone”, or “Happy Lace”. Agate is said to start as a nodule in volcanic rock and ancient lava. From formation, the insides of agates are often left hollow and can form druzy quartz on the insides. This type will be saved for another Rock Day. The stones below are my collection of lace and banded agates up for grabs. The bottom left is crazy lace agate.

Pieces made with lace and banded agate.

In the SHOP now:

New Cave Lady Ring with agate in the works, and in the shop tomorrow: 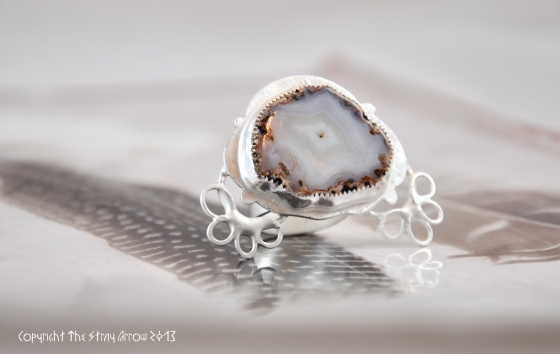 New items in the shop tomorrow night and Monday-